Emerald cut diamonds came to us in the 1500s when lapidaries accidentally stumbled upon this cut when shaping emeralds into rectangular cuts. The stepped facet, which is originally a reminder of the Aztec temple architecture was so loved by the people, that stonecutters started shaping other stones in emerald cut, diamonds being one. Despite its resemblance with two other cuts, radiant and asscher, an emerald cut is distinctive on its own rights. Over the years, the cut has garnered huge attention from the people, starting with celebrities like Amal Clooney, Beyonce and Angelina Jolie who lead the way. 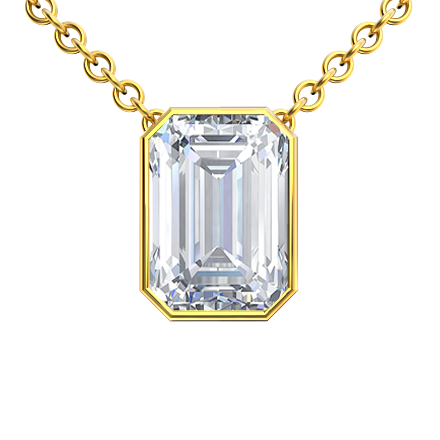 So, What Makes a Good Emerald Cut Diamond?
The length, breadth, width and depth ratio of any cut has the ultimate control over its fire and brilliance. The same goes for emerald cut diamonds. The best recommended measurement for an emerald cut diamond is 1.45:1.55. For a good amount of sparkle, choose a depth between 60 and 70%. Clarity is not a factor in emerald stones mostly because the cut hardly reveals the flaws. However, a VVS1 is recommended for crystal clarity for stones above 1 carat.

The Right Setting for an Emerald Cut Diamond
The emerald cut is a very simple, but elegant cut and it’s as if it’s designed particularly for solitaires. Although a four or six prong setting does just fine for an emerald cut, there are other choices too. A halo style works great with emerald cut because of its vintage-inspired look. The added benefit of a halo style is the extra bit of sparkle which ladies love. Other than that, any solitaire setting works great for the emerald cut.

How Expensive Are They
Speaking of the price, the value of an emerald cut depends largely on the quality of stone, or in other words, its 4 Cs. However, generally speaking, they are quite expensive and the reason for that is, only 3% of the global production of diamond is shaped into emerald cut. That makes it pretty rare. On account of its rarity, the price gets a little leverage. However, what it lacks in price, it makes up in its seeming largeness. Because of its elongated shape, an emerald cut diamond normally looks larger than its carat weight. So, even if you pay a little extra to get an emerald cut diamond, you can adjust it by choosing a smaller stone without compromising the visual size of the stone.