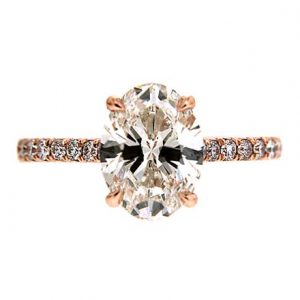 The world of fashion spins every day and each day brings a new trend to light. There is no exception to jewelry. The tastes of people revolve around what’s popular in a fashion season. So, who decides what’s popular? That’s a dubious ground. Speaking squarely, it’s the industry that tosses out new and novel things every now and then and the ones that bait the fish actualize as the trending item. Well, taking a turn from the confusion, let’s find out what’s hot in the engagement ring shelf this year. Though the trend might entirely be upturned by the time December arrives, but for now, here is what’s turning all eyes.

Pink Gold
Yes, they call it rose gold. Now this color has made its grand and cameo appearances in almost everything from jewelry to gadgets. Seen Apple’s rose gold iPhone yet? So, in engagement rings, this metal makes an interesting influence. The pink gold is actually not a new thing in the market. It has been there in the past, and this time, it’s on a comeback. However, massively successful, rose gold engagement rings are making statements. The rosy shade is an obvious flattery to the feminine side of the buyers. More importantly, it’s the shade that’s universal in its suitability with all skin tones.

Motley Diamonds
So, while prim rose engagement rings rule the market from its top position, at its heels are rings that use colorful diamonds. As it is, we know diamonds to be sparkling in its white and colorless form. But, there is actually a wide range of differential tones in diamonds that were not welcomed in the market before as now. And yes, they are natural. A grand surprise awaits the buyers who are ready to give these spectacular, very miscellany rings a try. Diamonds of colors such as, yellow, pink, blue and black are now widely used in engagement jewelry over the world.

Floral Accents
In the last decade, we hardly ever saw floral accents in engagement bands excepting in antique pieces. They were overused and eventually declared outdated, and was speedily replaced by the minimalistic designs. However, this year, they are back and are in full bloom. Jewelers are using all kinds of floral accents such as vines, flowers, petals, and much more. The flower inspired design accents give the rings a very feminine touch that was widely vanishing from the earlier designs. Even the halo inspired from the flowers have added a touch of difference to the rings.

Square Rings
Yes, you read it alright. The market actually has these incredible new bands which are square than round. Extremely sleek and almost as comfortable as round rings, these ones are a departure from how we know rings. The square edges are beaten inward to prevent chafing and pinching.