The radiant is one of the most symmetrical cuts you will see in the fancy list. Non-traditional and glamorous, the radiant cut is a highly coveted shape among buyers of all ages. There are buyers who simply love it for its shape, and then there are those that adore its extraordinary brilliance. Trimmed around the corners, this cut has a versatility that only a few from the fancy section can match. But what truly makes this cut exclusive, and a standout? Not one, but many factors are at play there. Let’s explore the qualities of the radiant cut and how they make it one of a kind. 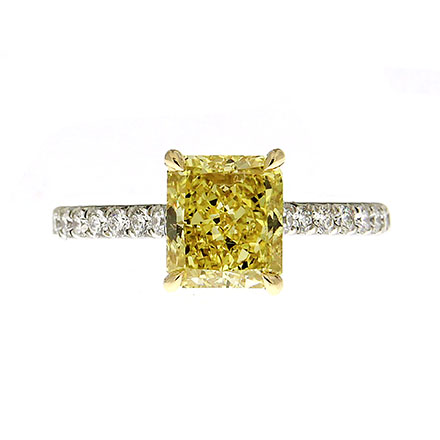 Geometry
The first thing that helps a radiant cut strike out is its geometry. It has an unusual and yet highly attractive shape. With its corners, a radiant cut may look very similar to the emerald cut, but without them, it looks staggeringly different. The faceting too deserves some credit in its shining out. The style of facets in a radiant cut is responsible for the fiery look which radiant cut diamonds exhibit. So, while the cut maintains a soft look, it balances the softness with high shine. Sometimes as scintillating as a brilliant cut, radiant is one of the most beloved cuts there is at this point.

Compared to Cushion Cut
The cut that comes closest to a radiant is the cushion cut. The two have often been compared, based on their geometric similarities. Although similar in some ways, the two cuts are vastly different. Among the things that are different, a key point is the silhouette. Although at the first glance you cannot ignore the semblances, but upon examining you will see that the two cuts have very apparent differences in their shape. The radiant cut has a sharp rectangular online and even without its vertices, that shape has a commanding presence. The cushion cut is more on the rounded side. It isn’t exactly rectangular, no matter the measurements. It has a rather oval appearance, which makes is essentially different from the rectangular shape of the radiant cut.

Aside from the cushion cut, the radiant cut is also compared to emerald and princess cut. In each of the cases, you will see that the former stands out. If you are not a traditionalist, then the radiant can be a potential cut for your diamonds, whatever be the jewelry you have in mind.