Ways in Which Eternity Rings Differ from Anniversary Rings

So it’s a special occasion and you would like to get your significant other a gift that tells how much you love her? It has got to be a ring, because noting expresses romance better than a ring. But before going out and buying a ring that you like, you need to understand that eternity rings are different from anniversary rings. Now your occasion could be either, and it’s important that you pick the right ring so that your purpose is best served. You want to start with identifying the points of difference between an anniversary ring and an eternity ring. Here is what you need to know. 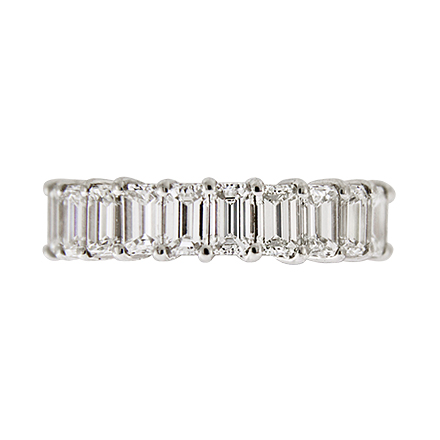 Diamonds around the Band
The first and most important point of difference between the two rings is how far the gems go around the band. You probably have noticed that unlike in engagement rings, both anniversary rings and eternity bands have micro- gems sprinkled all over the band. Now to identify which ring it is, you need to turn the ring around to see how far back the stones go. In eternity rings, the whole of the band is lined with diamonds. For anniversary rings however, the stones go up to a certain point, but not all the way. For most anniversary bands, the diamonds line the front half of the band. The rest of it is left bare. That’s a part of the reason why eternity rings cost more than anniversary rings. So, that is the most important point of difference between the two kinds of rings. So, although the rings look very similar, they can be told apart by their diamonds.

Occasions
Now that you know in what ways they are different, let’s find out which ring is suited for what occasion. While it is obvious that anniversary rings are specially crafted for anniversaries, there is no set purpose for eternity bands. Eternity rings can be exchanged in weddings. They can also be gifted as a romantic gesture on a special occasion. However, anniversary rings are best saved for special days like wedding anniversaries or relationship anniversaries. Crafted particularly to convey the longevity of relationships, these rings stand out in expressing love and commitment.
However, whichever you pick for the forthcoming occasion, you now have the choice to get them custom-made. So, make use of the service to custom-build your ring from scratch.