Tourmaline – The Gemstone of Artisans 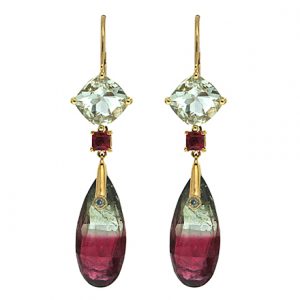 “The Gemstone of Artisans” – Tourmaline is a cyclosilicate mineral with a name that comes from the Sinhalese word for “mixed,” turmali. Tourmalines occur in every hue of the rainbow and in more color combinations than any other gemstone. This may be why tourmalines are said to encourage artistic intuition with its many faces and moody expressions.  Bicolor and tricolor tourmalines are very popular. One bicolor combination, known as a “watermelon tourmaline” displays a pink center with a green outer edge.

Tourmalines are most often cut in long rectangular shapes because of their long and narrow crystal shape. From time to time, one of these jewels will contain needle like hollows within the stone. When cut just right, these inclusions become a diffuse cat’s eye.

The jewel family known as “tourmaline” comes in a wealth of colors, containing nearly every shade in the visible spectrum. Most specimens have two or more hues in the same crystal, which can lead to festive looking stones. One eye catching subset has a green outside, thin white center streak, and pink interior, resembling a watermelon.

Besides color, tourmaline is notable for what happens when it’s heated. When carefully subjected to high temperatures, the stone becomes electrically charged. When heated, one of tourmaline’s notable properties comes to light. In a tourmaline, warmth is converted to static electricity, earning it the nicknames “ash drawer” and “Ceylonese magnet.” Experiments in the early 1700s revealed that heated tourmaline would attract hot ashes as well as drawing and repelling non-conductive materials. Of the gem quality tourmalines, yellow green and blue tend to be the most magnetic, while pink and red are the weakest.

Since the 1912 American National Association of Jewelers conference, tourmaline has been the October birthstone side by side with opal. The decision seems to have been a contentious one, as one member of the conference later wrote how he felt since tourmaline had only been known since the 1700s, it didn’t have a place with other jewels which have been prized for longer. However, as both tourmalines and opals are known for their colorful natures, their partnership as co-birthstones is reasonable.

One of the most famous tourmaline connoisseurs was the Dowager Empress of China, Cixi. She had a particular soft spot for pink tourmaline. Her fondness was so great that mines in Maine and California exported most of their jewels to China. There, the stones would be faceted into jewelry or carved into snuff bottle and other objects d’art.

The Ethereal Carolina Divine Paraiba, mined in Paraiba, Brazil is one of the world’s largest tourmalines. The faceted jewel weighs 191.87 carats and is cut into a brilliant oval, displaying its blue green color and eye clean clarity. The Ethereal Carolina Divine Paraiba is currently owned by a Canadian firm, Billionaire Business Enterprises Inc., and holds the world record for largest cut Paraiba tourmaline.

This gemstone chameleon is so good at taking on beautiful colors that it was mistaken for other jewels over the course of centuries. Tourmaline gradually gained recognition as a stone in its own right, first noted for its electric properties. In time it became the favorite of royalty and was named a birthstone. In the present day, it’s commemorated in record books.