The Inimitable Beauty and Allure of Cushion Cut Diamond 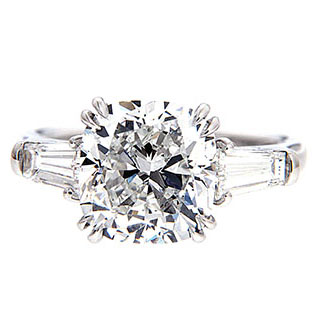 The renowned cushion cut diamond combines the precision of a square or slight rectangular cut with rounded corners. This classic cut has retained its popularity for nearly 200 years and was ‘the’ most popular choice of diamond shape during the first century of its presence. The cushion cut was the universal de facto diamond shape.

Compared to most modern cuts, a traditional cushion cut diamond returns light in a larger and chunkier pattern. This trait, combined with its unique enlarged culet, has given birth to the distinctive cushion or pillow appearance which until now remains highly prized and desirable among dealers and aficionados of antique diamonds.

The standards in cushion cut diamonds differ more than the majority of common diamond shapes. And in most cases, personal taste and preferences shall dictate choice. Though usually less brilliant than the modern round brilliant, a cushion cut diamond more often than not offer better fire, which plays a vital part in its appeal.

Modern cushion cuts are mainly classified into two main categories: standard and modified. However, the differences between Modified and Standard Cushions are somewhat technical and minute in nature. Their effect on the appearance of the stone is likewise rather minimal. In reality, history is essentially the key differentiator between these two. The Modified Cushions are simply the modern variations of the original facet patterns whereas the Standard Cushion specializes in cutting styles that have been in practice for a long time.

Evaluating color and clarity in cushion cut diamond is subjective. Many consumers actually prefer the slightly warmer hues of G-H diamonds over the tranquil colorlessness of D-F diamonds. When it comes to clarity, GIA provides excellent certification with their elaborate clarity grades.

While considering a loose cushion cut diamond or an engagement ring, make sure that you know the precise measurements and exact shape of the gemstone.