Signet Rings for the Men of Today

Signet rings literally went out of existence after the last century, but the year 2017 ushers the revival of these classy rings from the past. Signet rings are back, and yes, there have been more than just a fewer sightings in the first 4 months of this year. So, if you thought that people’s love for signet rings have died, think again. These rings have once again made an easy way into the hearts of men and this time, the celebs are the firsts to take the lead of trendsetting these rings, reinstating their place back in the world of fashion. 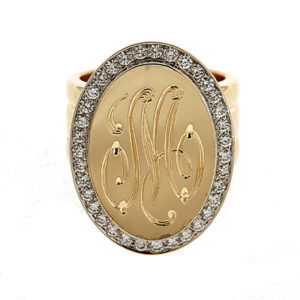 Why Are Signet Rings Special
Signet rings, often called the gentlemen’s ring was pretty much the design that held monopoly in rings in the men’s section for a pretty long time. The idea of signet rings arrived with the realization that wearing one’s crest is fashionable. So, businessmen and elites started the trend by curving their company’s seals in their rings. That makes them easily identifiable and distinguishable in the crowd without having to pass a word of passive advertising. From Pope Benedict of Vatican to Prince Charles of Great Britain, every eminent figure from that century was seen to wear signet rings. However, the style was immediately loved and was absorbed down the line. In absence of a commercial entity, buyers started to engrave their initials in the rings to keep the essence alive. That worked great for a large mass of men for decades until new designs came to hook their interest.

The Fresh Collection of Today
So, with trailblazers setting the path for us, what would it be for the buyers of today? Signet rings in this century no longer hold the same essence as it did in it’s hey days. Neither does every buyer have a business to proudly wear around in their rings. Luckily, the modern signet rings have stepped away from the usual avatar. Today, the rings bear a lot more ornamentation than before. They are often inlaid with gems in the flat front with a golden letter gilded at the center. In some cases, cluster diamonds are sprinkled over the square space to create the extra shimmer. Signet rings are curved in gold and platinum. Though the golden rings are more popular than platinum, men are gradually opening up to signet rings in platinum, palladium and sterling silver.