Ruby has occupied a central place in the catalogue of gemstones. It was first noted and thereafter preferred for its rich red tone. When in most stones, color is found in trace amounts, this mineral conundrum exhibits a thick blood-red color. Equated with emerald, sapphire, diamond and the likes, this gemstone occurs naturally in clusters. Though in rough, some rubies hardly look anything grander than colored mosaic stones, after a shave and polish, they turn into something exquisite that can easily knock off all that contends its beauty. Antithetical to common misconception, ruby also occurs in a natural pink tone.

Though this stone was once popularly used in expensive jewelry, it has now been largely replaced by the likes of diamonds and sapphires. Very recently, a return of rubies has been observed in the trend, and sinceits comeback, the market just hasn’t stopped talking about it. 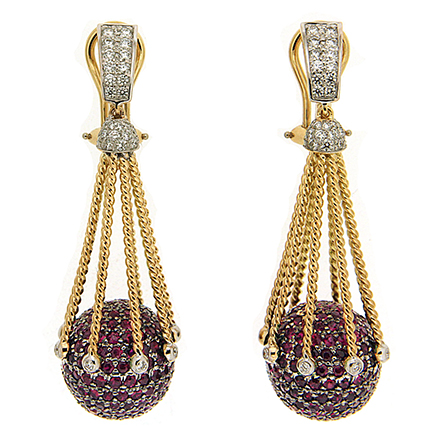 Ruby Solitaires
The market in this century is generously supplied with single stone ornaments, and the key preferences in that range are diamond first, followed by emerald and sapphires. The stores have never displayed ruby solitaires liberally owing to the scanty production. Jewelers wouldn’t risk making ornaments with rubies alone because there are other choices to overshadow them. The popularity of ruby died with the turn of the new century it seemed. But the recent scale of production has changed that understanding as the market sees more and more spectacular pieces of ruby solitaires. This has renewed popular interest in the stone that is inspiring the jewelers to deliver landmark pieces.

Ruby Center Stones
Aside single-stone ruby jewelry, there is another variety in which ruby is used in combination with other gemstones. Diamond makes a fine company of ruby which led the jewelers to the realization that almost any mute colored stone can be used with red rubies to create interesting assemblages. Resting on that conclusion, ruby has been paired with translucent diamonds, yellow sapphires, emeralds, aquamarines, opals and even lapis lazuli with great aesthetic success. The display of colors has proven to the highlights of such jewels.

Gold and Ruby Rings
If there is any metal that has an apple and cinnamon chemistry with ruby, then that is yellow gold. From time immemorial, gold ornaments have been beset with small and big pieces of rubies. Together, they have brought into being some timeless pieces that have passed through generations with tremendous value appreciation.