A Reinvention of the Art-Deco Style

Emerald cut diamonds that started to make appearances first time in the Art Deco era was an instant hit, and to this day, it is one of the fanciest and choicest cuts in diamonds. The likes of Beyonce and Kim Kardashian have demonstrated their favor for their style by embellishing statement-making emerald-cut engagement rings in the past. More than it being a popular cut among celebs, emerald-cut is a classic shape that has a distinct antique vibe about it. It is no wonder that the stone is on its path to popularity in this era where people are out looking for rare and exquisite. 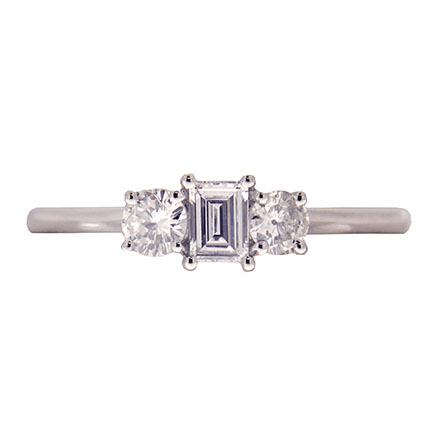 The Background Story
The emerald-cut got its name from emerald stones with which it still is often confused. The cut is identical to the patent cut seen in emerald stones. Emerald being extremely fragile, the cutters were motivated to produce a cut that counteracts to its fragility. That’s when the emerald cut originated, but it wasn’t until 500 years later that the cut came to be recognized by its now name in the Art Deco period. The cut’s shot to fame happened in 1940s which is why it is so often related to the nostalgia of old Hollywood’s glamorous past.

Sparkle and Brilliance
Emerald cut has many advantages but extraordinary brilliance is not one of them. If you are looking for a brilliant-cut diamond, then emerald-cut is not your ideal pick. However, that is not to say that emerald-cut stones do not shine at all. In fact, these stones have quite a good sparkle that is even hard to miss. However, in a side by side examination with a round-cut diamond, an emerald cut may be disappointing. Otherwise, the shape has a decent sparkle that works for many.

Price
The greatest advantage of an emerald-cut is its price. Being less than its brilliant-cut counterparts in popularity and brilliance has acted as a boon for the takers of this cut. Owing to its moderate popularity and sparkle, the stone is priced far lesser than a round or princess-cut stone. In addition to that, the wide table of the stone gives it a carat advantage that cuts corners in terms of pricing. All put together, an emerald-cut diamond is a profitable purchase for anybody who is not too hung up on the A-listed cuts.

Should you pick an emerald-cut diamond, try putting it an antique-inspired band for best effect.