Radiant Cuts: The First in the Square Shape 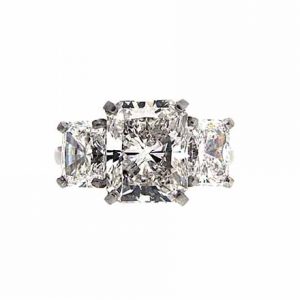 Of the square cuts invented to shape diamonds, the radiant is the trailblazer. It all started there, followed closely by the princess cut. It is also the first in its league to exhibit brilliant-cut facets alone in the pavilion and crown.The cut shot to limelight in the year 1980s when it became a much preferred cut of diamonds among jewelers. The leveled sides of the square reveal the uniqueness of the cut while linking it to its precursors and successors, viz., cushion and princess cuts. Speaking without passion or prejudice, the radiant cut is beautiful on its own rights, and much of its brilliance goes to rounded corners of the stone.

Bow-Tie
Bow-tie effects are more pronounced in radiant cut stones that are shaped rectangular than square. Relatively, bow-tie is not a common effect to have in stones cut in pear, marquise or oval shapes. However, the effect in radiant cut stones swerves between intense to invisible. You might not be able to calculate the kind of bow-tie effect a stone may have, judging by their certificates. Instead, it is a thing that reveals itself to visual scrutiny. So, it’s best to have your diamond consultant look at the stone for you before you go ahead and make the purchase.

Purchase by Numbers
Regardless of the quality of stone and its 4 Cs, you have to respect the figures of a cut. The aesthetics of a stone is enhanced by its cut, and if you do not know the precise measurements well, you might just make the wrong purchase against your hard-earned money. An excellent radiant cut diamond should have a table size ranging between 61 and 69. For the next best grade, pick anything between 57 and 60 and 70 and 72.
The beststone cut has a depth of 61 and 67. Ideally, it should have a very thin girdle, but those with a little thick ones also fit the “Excellent” category. For the best effect, do not buy a stone with a culet. If at all, go for anything that has a very small one. There is no definite shape restrictions to a radiant cut diamond. It is governed by personal choice. You may order for a perfect square of 1.00 to 1.00. Alternately, you may go for the rectangular ones which might not look very different from squares, but do have numeric differences.