The Popularity of Three-Stone Rings

It was only yesterday that three-stone rings were churned out from the trend mill and now they are a dominant choice in the market. So, what has been happening with these rings and how did they come to become such an instant hit among people? The first thing in support of their effervescing popularity is their relevance to all occasions and outfits. It’s a smart choice of accessory because it pairs well with pretty much everything you can think of. However, that’s not the sole reason why these rings keep popping up on advertisement screens and in the hands of celebrities in red carpet events. There are other reasons that stand to hold the popularity of these rings. 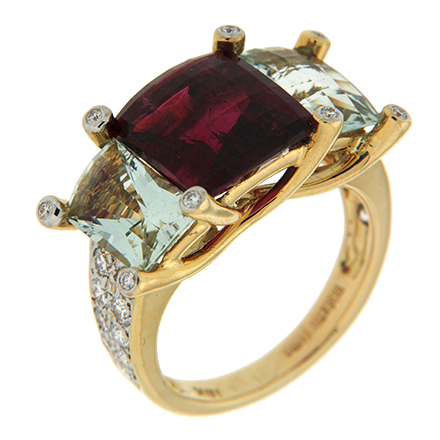 An Enduring Symbol of Romance
A three stone ring has not accidentally come upon its wild popularity. It is an enduring symbol of romance and that’s how it has found an easy way into the hearts of people. The three gemstones mounted on the ring are symbolic of something that is vital to the very idea of love. The edge stones stand for the past and future, while the center stone represents the present. Love, like the universe is timeless. It’s something that is there for eternity, and that’s what the three stones indicate.

A Style Statement Right Now
It’s no secret that three-stone rings rank second in popularity to solitaires, and that’s a pretty good score for a ring that has only entered the market. The ring became so popular almost instantaneously that designers immersed themselves into crafting variations of the designs, and thanks to their prompt endeavor, today we have a galore of three-stone rings wearing inimitable details and spectacular designs.

A Creative Liberty
A three-stone ring is a symbol of love and an artefact of high fashion, but most of all it’s a freedom of creativity. The style hands out to its buyers, creative freedom on a silver platter. You can play with colors if you like, or stick to mono-tone. It’s up to you, but it gives you the liberty to choose your own gemstones. Three-stone rings come in contrasting, analogous and monotones. If you like diamonds, customize it with diamonds of one or three shades. Same goes for other gems.