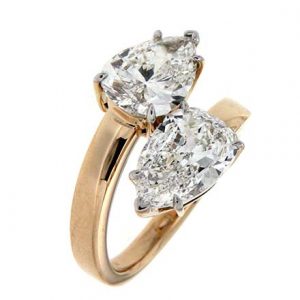 Created over 500 years ago, pear shaped diamonds are amongst the oldest diamond cuts. Though they initially featured in drop earrings and necklaces, they today make stunning engagement rings too. They are more often used as side diamonds though a solitaire pear shape engagement ring has also become a much sought after choice. Pear shaped diamonds are also sometimes referred to as teardrop diamonds or pendeloque shaped diamond. They are available as pear loose diamonds as well. They are amongst the most unique shapes and have over the years fetched mixed reactions.