A Pear Cut Diamond: How to Make the Best out of a Buy 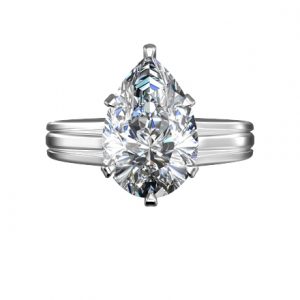 A pear cut is originally a brilliant cut, the uniqueness of which lies in the concept of its shape. It is inspired from a blend of marquise and round, and obviously, from the shape of the eponymous fruit. The stone is rounded at the bottom and tapered on the top. In a way, it also looks like a water droplet because of the higher sparkle towards the curvy bottom. It is usually used inverted in jewelry, with its apex pointing south. Pear cut is one of those fancy shapes that are often called “soft-sided”. The greatest virtue of this cut is that it brings out the color of the stone as best as possible.

Buying Tips
When buying pear cut stones, it is wise to stick to the color H or at least around that side of the wheel. The final point is to make sure that the stone appears as white as possible. Why? Because white stones look brilliant against the white casing of gold and platinum. However, for rose and yellow gold ornaments, the color recommendation would be anything between J and K. This will only bring down the price and you may use what you saved in buying a larger stone.
For a pear cut stone, standard clarity is SI1 and SI2. The best thing about a pear-cut stone is that it can conceal the inclusions all too well. This is more prominent around the rounded side, something that works in favor of round-cut stones. However, at the tip, the inclusions are downplayed even better. So much so that it gets quite impossible to spot any flaw at all, even under a bright light.

The Best Measurements
As for the cut parameter, there are some numbers that you better stick by. In order to make a good purchase you should be aware of the parameters that make the best of the cut and the stone concerned. For pear cut, depth below 66% is recommended. Polish and symmetry should both be of grade good to excellent. The stone table should be anything below 66%. As for the measure of length against weight, pick anything that is within 1.75 starting at 1.55. Though that is not a very wide margin, you may rest assured to get more than ample options. Please bear in mind that the units recommended are not flexible as is the case with cushion cuts. If you want to make the best buy, stick to the numbers.