The Origin of Anniversary Rings

Rings that Celebrate Life Together 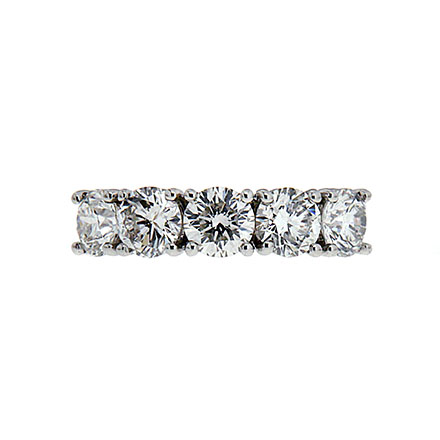 The tradition of honoring wedding anniversaries is centuries old. At first, only certain anniversaries such as the 25th or 50th years were commemorated. Now, every happily married year is celebrated. Today’s couples mark these milestones through romantic gestures, be they a night out or diamond rings.

Lists naming which type of gift to give on which anniversary year to at least the early 20th century. These suggestions vary, with some mentioning presents of wood or pottery. Others follow a theme, such as flowers or gemstones. Today’s couples may focus on diamond anniversary bands as an echo of their engagement or wedding bands.

Diamond eternity bands are rings with small diamonds mounted all around the shank. They premiered in the 1960s and were promoted as anniversary gifts. The circle of diamonds around the finger symbolized the enduring love between a couple. Modern eternity bands come in a variety of cuts and settings, such as pave diamond bands.

Three stone diamond rings display three diamonds of the same cut, but different sizes. The three jewels are meant to represent the past, present and future of a couple. They’re often worn as engagement rings or wedding bands. The meaning of the diamonds also makes them well suited for anniversary rings.

Other diamond anniversary bands feature a row of five or seven diamonds. These jewels are the same size and cut and placed onto simple bands. The mountings used are common prongs, meaning two diamonds share the same set of burrs. This type may be a good choice for someone who enjoys understated ring designs.