New Halos in the Block

Halos are one of the oldest, most vintage design motifs in jewelry that have survived till this new millennium. Halos have graced all kinds of jewelry from pins to patches, crowns to talismans and more. Early on, it used to be the hallmark of expensive jewelry. Halos floated back up in the 21st century when people started to take note of this ingenuous motif in vintage jewelry. Once strictly a feature of vintage-inspired jewelry, halos are now a part of the contemporary jewelry as much as diamonds and platinum.

Halos That Look Past Their Classic Appearance

Jewelers, in their constant attempt to improvise the classic halo style to keep the diversity alive have come up with a series of halo styles. Although they all bear some similarities with the original halo design, they are unique in their own rights. Very recently, a batch of new designs have landed the market. The jewelers are calling them the luxe halos, and if you can steal a glance, you’ll see why. These new halos, though still indivisible from the classic halo have something observably different about them. They score high in their antiqueness, but are inimitable in their modern-ness. Now that may sound conflicting to you, but these halos indeed are a cross between vintage and modern. Speaking in a very clichéd way, they bring in them, the best of both worlds. 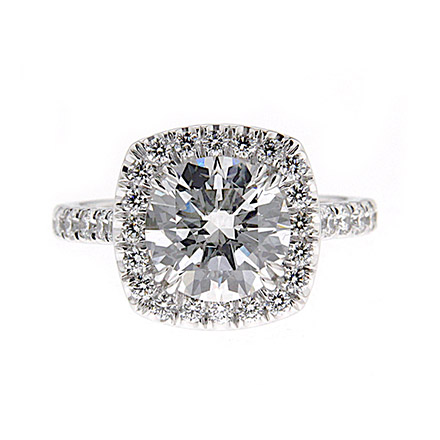 Round, Cushion, Pear, Oval and More

The first thing thats strike out all conventions in these new halos is their cuts. Jewelers have come to identify the potential of untraditional diamond cuts in designing halos. Ergo, these new halos are designed using round cuts, as well as unconventional shapes like pear, oval and cushion. Oval is a very elegant cut, while pear is pure vintage, whereas cushion is unusual. Bringing them into the halo design was like mixing many flavors of ice cream to create a new flavor altogether. The introduction of these less central cuts have paved the formation of a new style of halos, one that appears in the middle of new and old.

The styles so far have been a mix of elegant and cool. They, however, haven’t lost their very vintage-ness that halos are ideally recognized for. So, if you were hoping to find something in halos that are a little different from the classic versions, it’s time to go shopping.