Myths That Make Shopping for an Engagement Ring Twice Confusing

Most myths that surround engagement rings stem from distorted perception and a general anticipation of buying one. These myths mostly go around in the men’s tribe that contributes generously to making this worse than it really is. So, if you are neck deep in the process of buying an engagement ring for the woman you love and can’t tell facts from myth, here is some information that can help. Let’s take a look at some of the biggest myths and uncover the truth behind them. 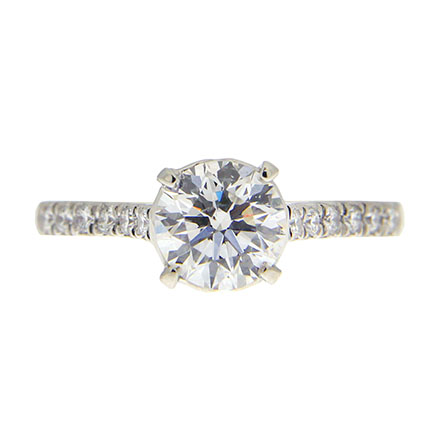 Carat Weight Equals the Visible Size
Don’t know how to tell you this, but a diamond is not always what it looks. That, to speak specifically, carat does not always equal the visible size of a diamond. There are certain cuts that are purposed to make a low weighing diamond appear much bigger. Then there are cuts that hide nothing that make a diamond look exactly what it weighs. There are some however that may even cause the stone to appear a little smaller than its carat weight. So, there are all kinds of cuts on the face of which a conclusive statement like the one above stands disputed.

Fluorescence Is a Flaw; Avoid It
The fluorescence of a diamond is the least known subject of all and that’s the reason why it is always treated with suspicion. Fluorescence, in theory is what gives a diamond its soft glow when put under UV light. It’s not a mark of a low-grade diamond as most people think. So, even if a stone is fluorescent, it can still be a good quality stone.

A Round-Cut Diamond Looks the Biggest
This is as far from the truth as two objects can possibly be from one another. In fact, a round-cut diamond has zero carat advantage. It gives a stone maximum sparkle, yes, but size advantage, no. If truth be told, the symmetry of the facets can make the stone appear slightly smaller, if at all.