Marquise Cut: The Mystery of Symmetry 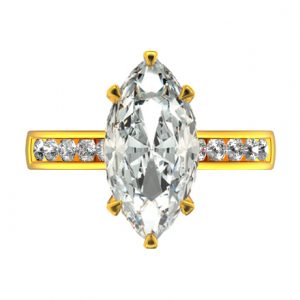 Among the cuts that make the best use of the size of a diamond, marquise is one. Resembling an American football in its basic shape, the Marquise is a brilliant cut, improvised to perfection. Marquise is a rather curious name and it dates back to the historical personage, the Marquise of Pompadour. The story recorded by historians goes like this. French emperor Louise XIV had asked for a stone to be cut in the shape of the perfect mouth of the Marquis and named it so. The advantage of this cut is its elongated shape which makes the stone appear chunkier than it actually is.

Visual Advantage
Gemologists have found out that the diamonds shaped in the Marquise cut have a substantial crown surface as compared to others. It is its property to maximize the size of a stone that has made it a preferred cut for many economically priced jewelry. In fact, designers have established that the marquise cut stones when set in a ring give the wearers’ fingers a long willowy look.
The Bow-Tie Effect
The diamonds cut in Marquise shape have bowtie of a certain measure. That may however range from stark to invisible. It is not for the certificate to tell how much of the bowtie effect is visible in a stone. It can only be known from visual scrutiny. If you are not confident enough, you may have a diamond consultant to take a look for you before you make the purchase.

The Measurements
There is no such limits to how slim or fat a Marquise stone might be. Your personal preference or the design of the jewelry governs that. Usually, the cuts follow a certain length/width ratio which is 1.75 to 2.15. So, with that calculation, you may be able to enumerate the precise measurements of a Marquise stone. Symmetry is what a Marquise cut stone stands on. Its beauty is the linear line on which the two ends meet. Basically, the idea is to create such precise symmetry through the cut that the left should be a mirror image of the right. If you look closely, this is where flaws like an extra facet and such can be found. Though the flaws are only minor, they are often visible.
A Marquise-cut diamond is usually secured in the contour of a jewel with a prong setting. This is almost a necessity in order to protect the two very vulnerable vertices of the stone.