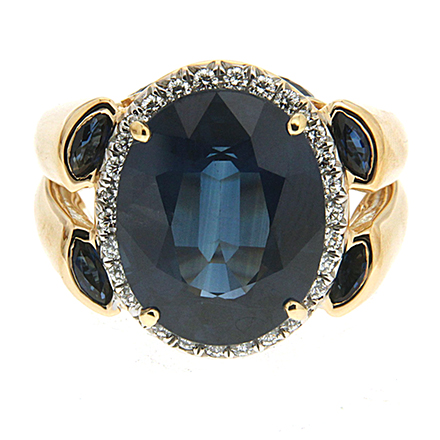 Along with rubies and emeralds, sapphires are one of the most well-known colored gemstones. Sapphires are a jewel quality member of the corundum family, alongside rubies. Though it’s most famous for its lush blue, sapphires come in every color other than red. Its supreme hardness, second only to diamonds, makes it ideal for watches and scientific tools as well as jewelry.

Sapphire gets its name from the Greek and Latin words for “blue stone.” For a number of centuries, blue corundum and lapis lazuli were considered the same stone. As blue gemstones, both were connected with the heavens. Tradition states that the original Ten Commandments were carved on tablets of sapphire. Ecclesiastical rings and other jewelry for clergy were often set with sapphire to highlight their link with the divine.

Royalty as well as clergy favored sapphires. Kings were said to wear the jewel around their necks and wrists as protection from harm. Sapphires were also thought to attract divine favor and guard against jealousy. Other virtues included truth, sincerity and constancy.

Sapphires are the birthstone of September as well as the jewel of Taurus, which runs from April 20th-May 21st. One 1913 poem states that people born under Taurus will maintain a sound mind if they hold a sapphire in their hands. Sapphires are otherwise linked with autumn, their blue hues equated with the fall sky. As autumn is the balance between the heat and coolness of summer and winter, gemologist George Kunz described sapphire as a calming jewel. This balance also makes autumn and sapphires a good mix.

The three intersected lines of a star sapphire were thought to represent faith, hope and destiny. The star serves as a guide, warding off the Evil Eye. It’s supposed to be so auspicious, it provides luck to former wearers who no longer possesses the jewel. As anniversary stones, sapphires make an appearance for the 26th, 45th, 65, and 67 wedding anniversaries. Star sapphires of different colors make up all but the 45th stone for the anniversary years. For anniversaries which are divisible by 13, asterism is strong enough to counteract the unlucky number.

A 1377 poem wrote of sapphires as a cure against poison. In England’s Early Middle Ages, sapphires were used to treat a wide manner of eye ailments. Thirteenth century German academic Albertus Magnus wrote in detail of sapphire’s effectiveness in removing foreign objects from the eye, while Jan Baptist van Helmont wrote of using sapphires as a topical remedy to remove toxins from afflicted patches of skin.

For a time, blue corundum and lapis lazuli shared the name sapphire. Today the word is for any non-red corundum. Sapphires are thought to have the color of heaven, giving the stone a touch of the divine and healing properties. Its blue may also be why its connected so heavily to the stars. While sapphires are believed to have many virtues and special properties, those with asterism are particularly auspicious, carrying good fortune.