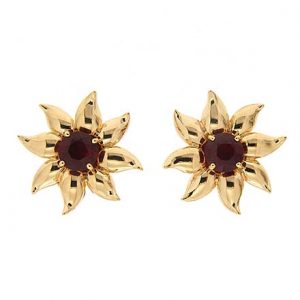 A close relative of sapphire, rubies are famous for their luxurious reds. Their hue comes from traces of chromium mixed in their aluminum oxide structure. For centuries, any red jewel was considered a ruby, which is why there are spinels and other stones with names like “The Black Prince’s Ruby.” There is some debate as to what qualifies as a ruby as opposed to a pink sapphire, with different countries having different standards.

The English name comes from the Latin “ruber,” meaning red. It has many names in Sanskrit, including padmaraga, “red as the lotus” and ratnaraj, “king of precious stones.” Rubies have been valued at least as far back as 200BC, when they were described as cargo leaving west from China. Though they were and still are highly prized in India, many cultures have their own ruby lore.

Ruby’s intense red was believed to come to fire trapped within the stone. The flames were so potent that its light would leak through any wrappings hiding the jewel. Ruby’s fire wasn’t limited to light and color. Dropping a ruby into water made the liquid boil.

The color of rubies linked the stone with blood, turning the jewel into a remedy for inflammation and hemorrhaging. The stone also alleviated heart ailments, reenergized a person and sharpened memory. In 1200s Kashmir, rubies were used to treat flatulence and stomach upsets. To bring out the best in a ruby’s healing properties, people wore them on their index fingers.

The 13th century writer Chau Ju-Kua described a ruby belonging to a Ceylon king. According to Chau, the jewel was five inches in diameter and glowed at night. The king used it as a restorative, rubbing the jewel on his face daily to promote youth and longevity. Other monarchs such as Henry II of France and Emperor Manuel were also recorded as having luminous rubies.

Along with providing light, rubies were believed to have protective qualities. They not only guarded their wearers from harm, but were potent enough to guard their owners’ land and the crops upon them. With a high quality ruby, the wearer would be safe from misfortune, be able to live safely among enemies, and stay safe from bad luck. Burmese warriors took the protection idea several steps further, inserting jewels beneath their skin to become invulnerable to weapons.

Ruby’s crimson hues connect it to summer, the warmest season. It’s the birthstone of July and the stone of the 40th wedding anniversary. Star rubies are earmarked for the 52nd wedding anniversary. It’s also an evening jewel, linked to 5:00pm. Rubies are associated with the zodiac sign Capricorn, which runs from December 21st to January 21st. A person born under Capricorn who wears a ruby will be free from worry.

Rubies and their luxurious color have been admired for countless years. Their beautiful reds were believed to have a number of special properties, including heat from fire trapped within the stone. Many countries and cultures used rubies for their healing and protective properties. Rubies were also connected to the heavens through the seasons and stars.