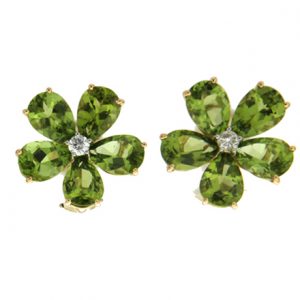 Peridots are best known for their bright green coloring. Unlike emeralds, peridots are olive green, often tinged brown or yellow. Most peridot on the market were formed in the earth’s mantle and brought to the surface through lava. Some samples however, have been collected from meteorites.

The jewel has had many names over the years. It’s a form of the nesosilicate olivine, and may be referred to as such in older jewelry documents from the 19th to middle 20th century. From the time of the Roman Empire, peridot was called topaz, as were other yellow jewels. The name “chrysolite” makes its first known appearance in 1747, coined by the chemist Johan Gottschalk Wallerius. The word “peridot” appears as early as 1245, though it’s unknown if the name applied to the yellow green gemstone.

Peridot is the birthstone of August. Those with peridot as a birthstone can place the jewel on their foreheads to help clear their minds and improve their judgement. Peridot is also connected with the Libra zodiac sign, which runs from September 22nd to October 23. People born under Libra can use the jewel to free themselves from evil spells.

An early legend states that peridot was found on an island in the Red Sea. The island was carefully guarded against unwanted gem seekers. Even those permitted to collect peridot there could never find them during the day. At night however, the jewels glowed. Peridot was also believed to come from the island “Topazios,” the land that gave topaz its name.

Some medieval churches in Europe have peridots which were believed for centuries to be emeralds. One stone in the Three Holy Kings shrine in Cologne Cathedral in Germany has a peridot 200 carats large. Even if they weren’t the gemstones people believed they were, peridots have a place in Christian lore, representing the excellence of divine nature.

To unlock the full potential of a peridot, it needed to be mounted in yellow gold. Peridot equipped in this fashion was powerful enough to banish nightmares. When a person dreamed of peridot, it was a signal for caution. The stone’s bright color might have linked it to the sun in people’s minds, giving the jewel power over darkness.

Peridots have a mercurial history. They have gone through a number of names and been mistaken for other gemstones. Regardless, they have been admired in their own right. Peridots were thought to have the power of the sun, glowing of their own accord. This helped give peridots the ability to banish darkness, nightmares, and other negative influences. The stone has multiple connections to the night sky as well, along with the divine.