The History of Wedding Bands 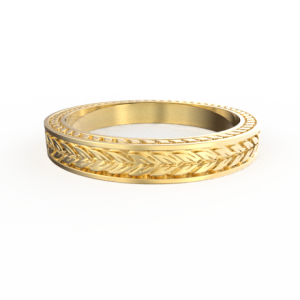 The culture and institution of marriage has undergone a remarkable change over the past centuries. And throughout this evolution, the symbolic wedding band has remained a constant. An age-old custom that has experienced transformations in appearance yet sustained its eternal connotations in the heart of the couple. Wedding bands represent the eternity of a union between two hearts. A well-accepted ritual around the world depicting the sentiment of love, wedding rings have grown to become a billion dollar contributor in the wedding industry.

An Egyptian Association
Though a contemporary fashion trend for its diversity of designs, wedding bands boast of a fascinating past dating back to the Egyptian era. However, the use of wedding rings supposedly precedes any written record. The Egyptians considered the circle as a holy insignia of infinity. To them, the conjugal journey of togetherness and devotion continued beyond the earthly frontiers, making the union sustain through eternity. The societal status and class of the families determined the elements of the band which varied from precious metals to braided hemps.

The Roman Contract
The ancient Romans maintained this practice where the exchange of wedding bands signified an agreement between the two parties. It is thought that the Romans pioneered the concept of wearing both the wedding and engagement rings on the fourth finger of the left hand. It was based on the belief that the fourth finger directly connects to the heart via a certain vena amoris nerve. Planting a ring on this crucial finger sealed the deal for life making an emotional connection between the twin souls. The Roman age witnessed a rise in use of different metals in wedding bands. Metals such as silver, iron, and copper were frequently used with gold becoming the definitive stuff of fascination and obsession.

Ancient Irish notion, also, held that any metal apart from gold brings bad luck. The superstition reached an extent in some areas where couples were prohibited from getting married in absence of a gold ring. A couple with limited means had the option of renting or borrowing during the ceremony which was later returned!

New World Notions
Though the tradition of wedding bands was discontinued during the Puritan timeline, the New World reintroduced the trend as a joyous tradition.
Irrespective of difference of opinion, the concept of wedding band enjoys immense popularity even in these bewildering times of continuous change.