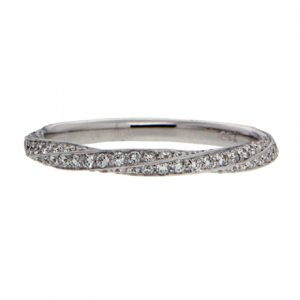 The English along with the rest of the Western World embraced this notion soon after. This was long before medical science had discovered the facts about blood vessels that carry blood to the heart. This particular finger gained in prominence and became the holder of the wedding ring from then on. The experts on marriage laws pronounced that wearing the wedding ring on this finger would enable a couple to bestow their eternal love for each other. A romantic notion, truly!
However, not all cultures believe in this vena amoris (vein of love) theory. People belonging to Denmark, Norway, and Spain do wear their wedding bands on the fourth finger too albeit on the right hand. The Chinese, on the other hand, believe that each finger represents a generation of your family. The fourth finger is therefore a representative of your spouse thereby your wedding vows.

The Bible though describes the right hand as the ‘good and blessed side’ making the normal wedding etiquette somewhat of a puzzle. Surely the Bible would have endorsed the tradition of wearing wedding rings on the fourth finger of the left hand as the marriage itself is usually presided over by a Christian priest in cultures that follow the Christ?

Wearing the ring on this finger makes some practical sense too. The left hand is not as frequently used as your right hand usually. Also your ring finger happens to be used much less than the other fingers of your hand save the pinkie. So wearing your wedding ring on this finger is a form of protecting your priceless ring from impending damage. What about the left handed folks though? Well, there are no stipulations about it so far. They can pretty much adopt the reverse etiquette and brandish their wedding ring on the right hand.