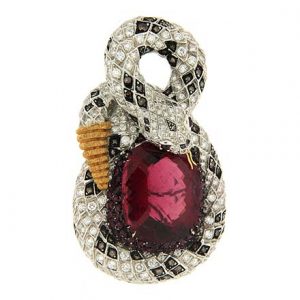 Diamond brooches might not have the recognition of solitaire rings and drop danglers, but they are on their path to glory starting this year. The concept of brooch as a fashion accessory has been underutilized and poorly explored. It was one of those pieces that came up in the 19th century, then remerged in the later 20th century until more fashionable ornaments took over and it receded into the folds of oblivion. However, public interest in decorative pins has rekindled this year. Jewelers are compulsively producing ornamental pins, some of which are the finest the industry has seen so far.

Let’s look at four of the best designs that have come to earn public awe and admiration this year.
A Pearly Leaf: Pearl has a distinct character and that is its iridescence. Even the most irregular shaped pearls demonstrate a fabulous level of opalescence that gives ornaments a foreign feel. This leaf is conjured with a number of pearls arranged around a diamond vein. The pearls are joined together by a gold wireframe underneath. Between the pearl mountings, every now and then, sprouts a small diamond. It adds to the sparkle of the piece while breaking the pearl lines.

A Gold Leaf: Very few can beat this piece in its beauty. This pin has been curved to replicate an artist’s version of a leaf. An outline of rubies in baguette mounting run along the edge of the leaf and reemerge to form the vein that extends to the midsection. The inside of the leaf is filled with cluster diamonds of uniform size. There is no interruption in the design which gives the lines a fluidity. The clip at the bottom is well concealed from view when looked from top.

A Diamond-Sapphire Bowtie: The USP of this are the patterns and stonework inside. Without the details, the silhouette of this pin resembles a normal bowtie, with a downward bend that gives a fabric-like feel visually. The inside is filled with diamonds and sapphires. Three uniform circles fill the flaps of the collar and the inner segments are inlaid with triangular sapphires that give the circles a sharp angular pattern from inside. A circle at the center of these ones are occupied by a small diamond each, as is the rest of the free space outside. Blue lines of sapphire rig the entire design keeping the shape contained and distinct.

A Spread-Wing Dragonfly: This one came to notice for its spectacular details. The wings of the dragonfly is given a certain translucent feel with the use of flimsy enamel filling. The webbed structure of the wings has been neatly imitated in the piece. The eyes are made of green emerald while the tail is a diamond inlaid line.