Are Engagement Rings Not The Same As Promise Rings 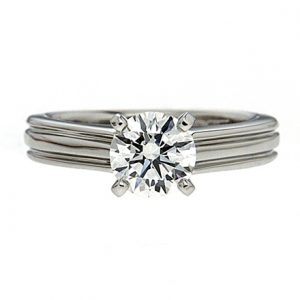 Engagement rings are often confused with promise rings. While they both have an obvious marital connotation to them, they are not essentially the same thing. Adding to that, the weddings rings are again different from the two of these. So, what exactly is a promise ring and how it is different from an engagement ring. Now, at first, they may all seem the same, but a little probing might help you distinguish. Take a look at the differentiated descriptions of the both and you will have a clearer idea about which would be more appropriate to present in your current situation.

A Promise Ring
A promise ring or the ring of commitment is a band that is offered to someone with a certain promise that it signifies to keep. Now the promise can be anything and not necessarily of romantic nature. It could be presented to a friend who you promise to stand by all your life. It could be offered to your mother as an expression of filial love and allegiance. It could even be given to a sibling as a mark of the bond that you share now and will cherish later when you walk different paths in life. All the same, a commitment ring can be extended to your beloved as a promise of tying the knot someday. A promise ring has immense emotional value and is taken for a serious show of commitment. However, it is not the same as an engagement, nor a wedding ring.

An Engagement Ring
An engagement ring is more immediate to the intention of marrying a significant someone. It is presented to the person at the time of asking the big life-changing question of “Marry Me”. Holding up an engagement ring to someone means only one thing, and that is you are asking their hand for the rest of your life. The purpose of an engagement ring is pretty simple. It is the gift that you pop out when you are fully ready to commit to the relationship so much so that you are willing to consummate it in marriage, sooner, if not immediately. Engagement rings are exchanged between couples who have been dating for a while now and are very sure of each other.
Speaking of visual differences, there is not much discernible nuances between the designs and built of the two. A promise ring might be a solitaire too as much an engagement or wedding ring. If at all, the promise rings are downplayed on the romantic element in the design. Depending upon what you are promising and who you are promising to, make the pick. Both the rings are available in gemstones and in plain built.

Either which, do know your heart well before making the buy.