Emerald Cut: The Squarely Play of Light and Shade 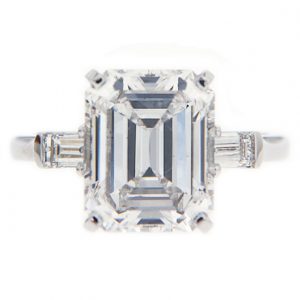 Unlike princess cut, marquise and other intricate cuts that thrive by the multi-dimensional facets, emerald is simplistic. The stone is shaped and sized in a certain terrace pattern around the pavilion. This leaves a larger surface area for the table on top and a perfect central apex at the bottom. Gemologists have been very particular about the effects of this cut. For most of the other cuts, the driving purpose behind it is to maximize the sparkle of the stone. As for an emerald cut stone, it creates a mirror effect. It appears that the lapidary who invented this cut was smitten by the illusion of a hall of mirrors and attempted to translate that in stones using a certain step-cut technique. Whatever the idea behind it was, it worked out a notch better than expected.

Under the Magnifying Glass
The highlight of emerald cut is its striking departure from the pattern most cuts adopt at the base. Emerald cut is all about accentuating both the bright and shadowed planes of stones in order to create a brilliant interplay. Using the same effect we see in the hall of mirrors, this cut creates a dramatic blaze in the stone which is fiery in its appeal. If this sounds like an exaggeration, you have to watch the reflectivity of an emerald cut diamond under the light.

Why Emerald?
Emerald cut derived its name from the emerald stone. The concept of the shape stemmed from the shapes in which emerald stones are cut. Now the cut is used widely for diamond stones used in rings and often in pendants.

Standards of Rating
Based on its component, a cut can be rated, if you can believe that. If you had so far thought that a diamond is rated only by its cut, color, clarity and carat, you only have the bigger perspective. Even the cuts can be singly rated, in this case, on the basis of its four facets namely, the table, the girdle, the culet and its depth. The best quality cut exhibits a very thin to mildly thick girdle. As for the depth, the top grade cuts are between 61 and 67. The best of the cuts do not normally have culets. However the ones with very small culets is rated “Very Good” by GIA. Lastly, the best cuts keep room for a table between 61 and 69. However, those ranging between 70 and 72 are not so bad themselves. The shapes however start at a perfect square and span up to narrow rectangles.