The Difference between an Engagement Ring and a Wedding Band 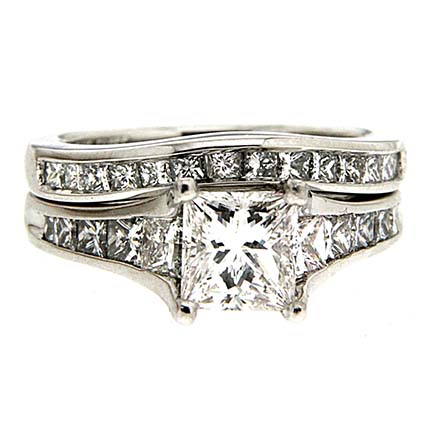 Since ancient times, metal bands have figured significantly in sealing the ties of betrothal and weddings. Most of us cannot imagine a marriage or engagement without stunning rings adorning the hands of the couple. Owing to their extensive and evolving history, the concept of engagement rings and wedding bands gets frequently mixed and confused.

For many the ensuing debate remains, what makes these two metal rings associated with the concept of matrimony, mostly alike and yet so different. Generally, both these rings are worn on the ring finger of the left hand. Though these two beautiful pieces of jewelry are often flaunted by married women, interestingly, they differ in numerous aspects.
Understand the differences between an engagement ring and a wedding band simply by identifying their fundamentally distinguishing functions. The purpose of an engagement ring is to convey the couple’s betrothal to each other where a man gives the woman a ring before taking their wedding vows. This gesture and the ring suggest the promise of an impending marriage.
Alternatively, wedding bands are exchanged on the wedding day and worn by the couple once they sealed their nuptial vows. Since the marriage and for the coming years of togetherness, usually both the engagement and wedding bands are sported by the lady whereas the man simply wears the wedding band.

An engagement ring is usually a magnificent metal band decorated with precious jewels. It also garners more attention for its splendor and exquisiteness. Engagement ring is often portrayed as a public token of affection of the couple as it announces the status of a forthcoming marriage. Conventionally, an engagement ring comes decked with a brilliant centre stone typically made from finely cut diamond of varied carat weights.

Though for many engagement rings are a priority, a wedding is never complete unless the couple changes the round and seamless wedding bands that symbolize a life of companionship, togetherness, and love – a journey that is equally smooth and endless. Wedding bands are simple in design and its finish. Some couples also invest in diamond-studded wedding bands though in rare occasions. A wedding band conveys the sentiment of the marriage – its endurance and sanctity for the years to come.