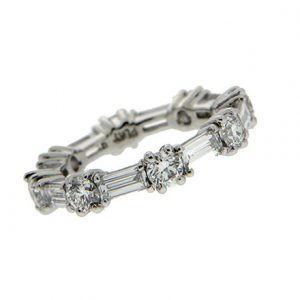 Maybe because it is a traditional choice and because of the influence of tradition, we are drawn towards it more! Maybe because they are genuinely the best choice in gemstone to cement a bond of eternal love! Or maybe because no other gemstones can replace a diamond’s beauty and durability! Diamond is the ultimate choice for engagement rings and wedding bands for many a reasons. Different people will have a different opinion regarding this. But whatsoever the reason, that diamond is the ultimate choice cannot be denied. A mere look at this beauty is enough to sweep us off our feet.

Once upon a time diamond was like any other gemstone. It perhaps would not have reached the height of popularity had it not been for the De Beers’ aggressive marketing campaign post the unveiling of the De Beers mines in Africa. During the 1930’s when the demand for diamond declined in the U.S, De Beers decided to launch a campaign with what is now a classic slogan, “ A Diamond is Forever”. This campaign surged the popularity and sales of diamond rings, and even today, it manages to lure people towards it.

The marketing stressed that a diamond’s durability symbolizes the fact that a marriage is forever. Its purity and sparkle conveys the depth of each other’s commitments. It especially expresses a man’s undying love for his partner and his attachment towards her. It celebrates an everlasting bond and stands as an inseparable part of your courtship as well as married life. Over the years the campaign extended and more and more people got implanted with the idea that a diamond is forever and that only a diamond can cement the bond into an everlasting one. Eventually, it became synonymous with getting engaged or getting married with more and more people opting for diamond engagement rings and diamond bands.

The marketing campaign of De Beers may have helped diamond to get the fame. But as a gemstone, diamond is no doubt a thing of beauty. No other gemstone is as mesmerizing and stunning as the diamond. Over the years people have been intrigued by its beauty and timelessness. It is one gemstone that will never go out of fashion and will continue to enchant people for years to come. And because of it conveys true love and commitment it is and will always be the ultimate choice for engagement rings and diamond bands.