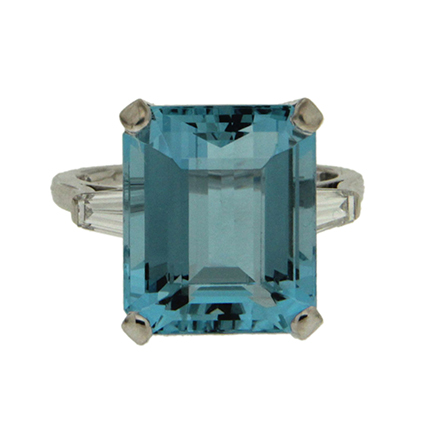 Colorless diamonds have taken a back seat this season while colored gemstones have taken their place in the front row. The bridal section of the jewelry is shimmering with colored wares, and this, as experts remark, is something that the market hasn’t seen in a very long time. Diamonds of color scale D, E and F have ruled over hearts for nearly half a century. It’s time to break the trend and bring in a little variety to the show. And what greater endorsement does a fashion artefact need than the approval of glitterati?

Jessica Simpson’s Ruby Ring
Very recently Jessica Simpson came forward to announce her engagement wearing the artefact of an impending wedding. Unlike most celebs, Simpson’s fiancé chose a red ruby ring to propose to her with. This may have something to do with her love for colors, or just the knowledge that his lady here is a trend person. However, the ring is stunning from all angles. A central ruby flanked by two sizeable diamond accent stones set in a gold band is hard to miss. In all honesty, the ring is definitely a prize addition to Simpson’s flourishing collection of valuables.

Halle Berry’s Engagement with Emerald
If you are out to please one of Hollywood’s most intense actors of her time, then you better have something more than tastelessly flashy. Fiancé Oliver Martinez had just what it takes to get his long-time girlfriend Halle Berry to say a straight yes. Berry’s proposal ring is one of the rarest celebrity engagement rings in Hollywood. The ring is beset with a square-cut 4 carat emerald stone with two tiny diamond accent stones. Hand forged, this piece is a product of Robert Mazio, the celebrated French jewelry designer. However, the real catch is not the stone, but the Phoenician code that is embedded in the stone. The code tells the story of the couple’s romantic relationship. The ring is estimated to be worth $200,000, and that’s not a surprise.

Inspired by them and a couple of other celebs who went the non-traditional way, the fad of colored bridal jewelry cleaved in. Stones like blue sapphire, opal, lapis lazuli, aquamarine that were never a part of engagement ornaments are now actively incorporated in their designs, solo and in combination. Colored diamonds are on the rise too, particularly pink and black ones. For obvious reasons, jewelers limit themselves to the pink shade in different intensities when designing wedding rings with colored diamonds.