Chrysoprase is a name that sounds a trifle unfamiliar to your ears accustomed to hearing about diamonds, pearls and emeralds, right? Fret not, now you have the option of wearing yet another beautiful gemstone on your person. Strangely, this wonderful apple green quartz was available in jars just about ten years ago. However, the good times don’t last forever. Today this rock has been designated as a gem and you would be overwhelmed by the magnificent jewelry that is designed from it. Go ahead and buy a necklace or ring for yourself soon. But it might be best to learn all about this wonderful gem first… 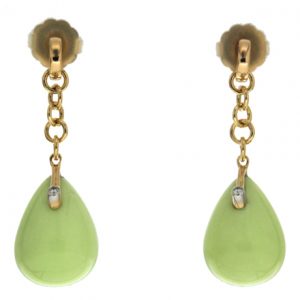 What Is It? – Considered to be a form of chalcedony quartz, this gemstone is famous for its vibrant Granny apple like hue. It is not transparent either and comes across as a solid minty green quartz. Chrysoprase owes its distinctive coloring to the presence of nickel particles within it. It is quite valuable and rare to find naturally. It’s similarity to jade has resulted in its world wide appeal.

Where Is It Found? – It is found in various locations of the world including Brazil, Germany, Poland, India, and the United States of America. However, it is Australia that has been producing the most valuable Queensland chrysoprase since the year 1965. The color and quality of the Australian Chrysoprase has remained unsurpassed so far. It is no wonder, therefore that almost 85% of the world’s chrysoprase is obtained from this particular region.

History– The use of chrysoprase has been in vogue from time immemorial. This beautiful quartz has had significant rulers associated with it too. From Frederick the Great, the sovereign ruler of Prussia who had decorated his palace with this gem to Alexander the Great who considered it to be lucky for him and wore it on his bridle during the battles.
The name of Chrysoprase comes from two different Greek words chrys meaning yellow or gold & prase for leek that refers to the green color of the stone.

Associated Facts –
· Also called as the ‘Stone of Venus.’
· It is the birthstone for the month of May
· It is supposed to bring joy and wisdom to the wearer.
· It is also famous for its healing powers.
· Chrysoprase is believed to instill confidence and encourages the wearer.
· Its protective powers helped sailors sail amidst all kinds of danger in the ancient ages.
· It is thought to heal a broken heart as well.
· It does make sense to buy a stunning piece of Chrysoprase jewelry, even if you do not believe in its varied powers. The beauty is enough to keep you hooked. However, you need to check the following..

What to check before buying Chrysoprase?
1. Color- light to deep green but one that is not denoted as ‘parse.’
2. Clarity- Translucent is more valuable than an opaque one.
3. Cut & Shape – Rounds, ovals, cabochons, heart shaped ones and beads.
4. Treatment- Chrysoprases are untreated. Check this aspect before parting with your money.

No wonder, Katy Perry mesmerized the world with her gold and Chrysoprase earrings at a Washington DC dinner party for the rich and famous.