Charm Bracelets: Their Journey down the History 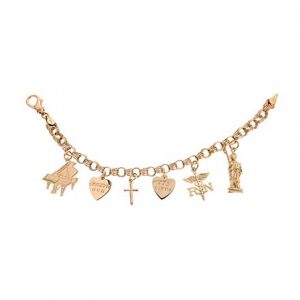 Charm bracelets have been aboard the trend wagon since their first resurfacing in the last decade. No sooner that it came to the notice of the jewelers that they set to drafting new and exclusive designs, giving this century-old jewelry an instant makeover. At present, the market is well-stocked with charms starting at cool and ending at ornate. Designs new and fresh, vintage and antique, and everything contemporary and choice are drafted every day around the world for this jewelry. While it is still wild, and on fire in the 21st century, its origin can be traced to 75000 years back in time.

Prophylactic Effects
Charms in the ancient civilizations where it was born was worn as talismans believed to have the property to ward off the evils. Charms then served to keep evil spirits from harming the wearers and those around with their positive energy. The verve of these amulets continued to protect people from ills throughout the pre-historic era. Back then charms in jewelry were made from animal bones, tooth, clay and sea shells. It wasn’t long after that the hunter-gatherers transitioned into more civilized being and the need for refinement in finer things were felt. Resultantly, with everything else, their jewelry underwent a significant transformation. The new age charm bracelets were carved in metals and studded with rocks that were later replaced by wood and gems.

In Germany
Archeologists studying ancient German settlements found remnants of tusk charms in different sites. Carbon dating revealed that the artifacts were about 30, 000 years old. Studies showed that the tusks used to stud these charms belonged to mammoths.

In Later Times
Charms did exist in British fashion too, and it did among the royals. Queen Victoria in her portraits is seen to wear charm bracelets back in the early 1800s. It was probably her endorsement or some other stimuli of encouragement that made it quite a fad among the nobles of the time. It however came to be found that Queen Victoria was a big fan of charm bracelets and that she had plenty of them in her own vault. After the death of Prince Albert, she ordered production of mourning charms which became phenomenally popular at that time. In fact, the lockets of hair too was another of her contributions.
Tiffany and Co. was the first company to introduce charm bracelets in the modern market. It was a link bracelet that had a petite heart dangler grouped with the chain.