Carat Comparison between Round, Oval and Princess Cuts

A carat is no bigger or smaller in different gemstones. Why then does a single carat of round cut diamond look markedly smaller than an oval cut one carat? The science behind that is simple. It has to do something with what you read in Physics as “optical illusion”. The diamond industry makes millions a year on this one law of physics. If you break it down to a simpler analogy, the numbers do not change in either cuts. It is only the appearance of the size that changes on account of the cut. 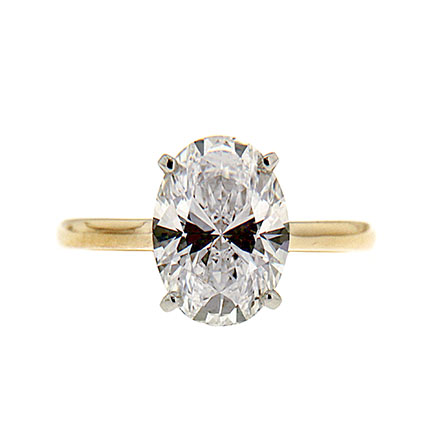 Round Cut: The round cut is by far the truest to its carat. That is part of the reason why a round-cut diamond ring is the costliest of all. But even for all its symmetry and carat-trueness, a round-cut looks visibly different in dissimilar settings. For a round cut stone below 1 carat, a skinny band works best. For anything above 1 carat, a thicker band works but nothing too broad. A gem appears bigger when placed with a skinny band, preferably one that tapers gently towards the stone.

Princess Cut: A princess cut diamond has a visual advantage over round cut diamonds, in that they appear bigger on count of their square shape. For princess cut stones, the visual effect of the band is not as profound as with round cut stones. So, the band can be however skinny or thick, it will not cause any visual disadvantage to the stones.

Oval Cut: Oval cut is a very popular pick among buyers looking for stones that look bigger for their size. The beauty of this cut is that it has a spready table which naturally makes the stone appear bigger than it really is. The oblong shape is deceptive of the true carat weight of the stone and that works in favor of the wearers. However, for maximum effect, choose your band wisely. Pick something dainty and the stone will look the largest. Oval Cut diamonds around the size of a carat looks a lot larger than both princess and round cut stones. So, if you are looking for something affordable, but not visually disappointing, then an oval cut is worth looking into.

In the light of the above comparison, it is obvious that a round cut has minimum and an oval cut has a maximum visual carat weight.