Buying a Ring for Engagement versus Buying One for Wedding

The clamor surrounding nuptial rings is so distracting that sometimes it takes a minute of focus to get the runway thoughts back on track. For couples who have an unsaid consensus between them regarding an impending wedding prefer to shop for both the engagement and wedding rings at once. Now, this prospect poses two big questions. First off, how is someone supposed to know which is which? Are there any hallmarks that each bear to tell which ring it is? Second, should I pony up more on the wedding ring or on the one for the proposal?
The search for the right ring can get quite confusing if you are not factually clear on these two elementary questions of the investment. Moreover, buying these two rings is too big of a buy not to hold an opinion on. So, when your personal choice comes into the picture, the purchase becomes a cocktail of confusion. To avoid a possible misstep on the way, here are some answers that may set you on the right course. 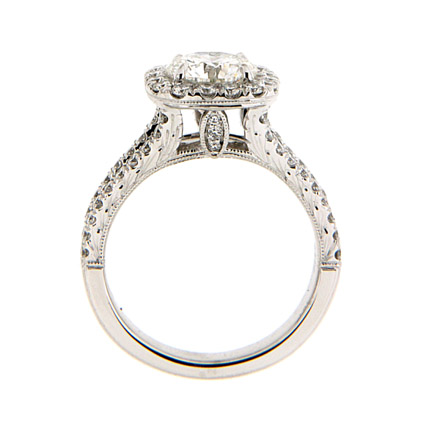 A Solitaire for an Engagement
Engagement rings are usually more stylized than wedding bands. Mostly diamond or other gemstone solitaires are designed for the event of proposal rather than for weddings. That is for two reasons- first an engagement ring is what holds your proposal up, and you don’t want a poor choice to hold sway over the response. Second, a proposal ring is what gets seen and shown more than a wedding ring. So, it better be a pretty choice. Speaking of that, engagement rings are the more ornamental and ornate kind.

A Band for a Wedding
Wedding bands normally come in band styles. Stone or no stone, they are built on the model of an infinity band. So, more often than not, you will find wedding bands to have no use of single stones. There is another reason behind keeping a wedding band simple. If you are buying a diamond solitaire for the proposal, pick a plain band for the wedding so that both can be worn together in the same finger without the stones chafing on one another.

Of the Two, a Proposal Ring Makes a Bigger Buy
From what has been said earlier, it is obvious that an engagement ring costs greater than a wedding ring. So, going by the convention, you must spend a little extra on the more embellished ring and the excess amount will be adjusted by the moderate prices of wedding rings.