Blue Diamond, the Rarest Member of the Diamond Family 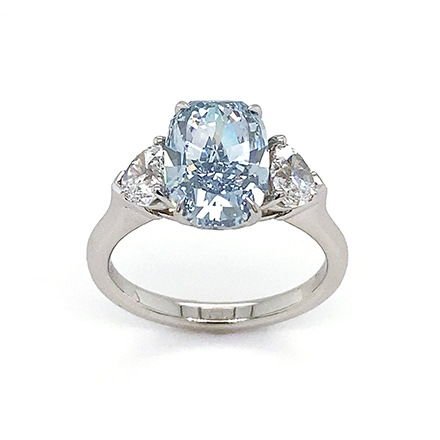 Lore and Legends
According to lore and legends, blue diamonds stand for good health, serenity, peace and affection. That makes it the perfect milestone anniversary and wedding gifts. It was believed in olden times a blue diamond protects its wearers from misunderstandings, ego clashes and bickering. With that faith, couples in marriage gifted each other blue diamond rings to preserve peace and harmony in their relationship. Today however, it stands as a symbol of opulence. Affordable only to buyers of a certain sect, blue diamonds are accrued by the world’s most opulent collectors in whose vaults they now rest. One of world’s most desired diamonds is Hope Diamond which is a blue diamond weighing 45.52 carats. The Hope Diamond has a rich history which spans over centuries. In 1762, in thick of French Revolution, the stone was stolen from it’s the then owner the French monarchy. At present, the stone is an asset of the Smithsonian Natural History Museum.

Quality Standards
Blue diamonds are Type IIB diamonds, one of the rarest and most expensive kinds. Blue diamonds are the priciest of all colored diamonds owing to its short supply. Although it belongs to the category of fancy colored diamonds like chocolate, champagne, yellow, black, red and other kinds, it stands at the top of that category. But surprisingly, there is no recognized grading system for blue diamonds. So, buying blue diamonds may be confusing on some level. However, the priority points of a blue diamond are its color and clarity.

Color and Clarity
In blue diamonds, colors and clarity are the two key elements. The blue color of these diamonds come from the presence of an element called boron which is basically an impurity. The higher the content of boron is, the deeper is the color. Although they are broadly called blue diamonds, they occur in different shades of greenish blue to grayish blue.