Big Diamonds, the Style of the Season

After cluster diamonds, it’s now the era of big chunky stones. Yes, they come for a cost, but with shine, glamour and prestige no lesser than that of a Patek Phillippe or a Cadillac. Recently, a number of these stunners have been sighted in the summer auctions. Correctly deducing from there, this year is going to witness a run of these spectacular bling buttons. Understandably, money poses a Stop for many from joining this fashion wagon. But, a second thought might unveil an alternate to ponying up a staggering figure on a fashion accessory. There are some cuts that give a light stone a flatter and seemingly bigger appearance. So, with mind over matter, here are some of your affordable choices of large dime-size diamonds. 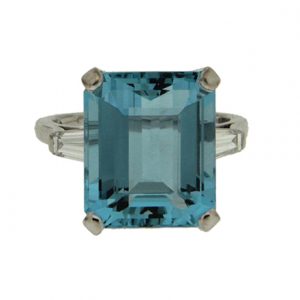 The baguette cut is, in a word, stunning. The step-cut pavilion, a sizeable table, a culet that continues in a linear mark, everything about this cut is perfect. But, if you haven’t seen a blue baguette diamond, then that explains why you still don’t own one. A large baguette is not necessarily a large expensive stone, but a wondrous handiwork of a lapidary. Cutters prefer to work with slightly elongated stones for this cut. The cube-paradox comes to life holding hands with the science of geometry with this cut. Though rings look just gape-worthy, I personally recommend framing a blue baguette in a simple lattice pendent. Why waste the show when you can afford one!

Pink might not be a universal favorite anymore, what with women stepping away from their conventional molds and adopting bolder and unprecedented characters, but only few can say no to a pear-cut pink diamond about the size of your thumb. One such piece was auctioned by Sotheby’s for $175.1 million some time back, which is a record in the book of highest bids. As evident as global warming, pink diamond is still a coveted asset among many women with taste. If you ease a little on the color and clarity, even a paltry sum can buy the cut and carat of your choosing without much heckling and haggling.

The oval cut came out the womb of demand for lighter and flatter stones. The oval cut is the mother of all latter cuts that shape small stones to look big in their ornament holdings. A very smart way to buy an apparently large oval diamond is to choose a stone that is low on clarity and with color between S and Z, preferably Z. That gives you a stone which is mildly cloudy, but has a yellow tinge which unleashes its intensity best from a gold setting. The inclusions are barely ever visible to naked eye, unless someone inspects closely.