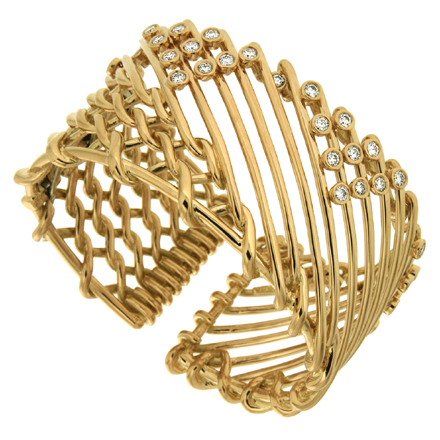 Dressers have always hit the wall when it comes to making a choice between bangles and bracelets. Though most decide in favor of the latter, it is not without a slight hint of doubt if they missed out on the finer one. If you are caught in the same doldrums, then you are reading the right piece of material.

As such, the choice between a bracelet and a bangle is a difficult one, but that’s only because we often unwittingly ignore the third dimension of this argument. The decision should be based on what’s hot in the current context. In today’s scenario, the trend totally invalidates the question. This season, it’s neither. In fact, the question you should be asking yourself right now is a different one.

Introducing a Third Kind
This year, it’s neither bracelets, nor bangles, but arm cuffs. Arm cuffs have fought out all banalities associated with the two and is a fresh start to arm jewelry. Though they may seem like either or more appropriately, a hybrid, these pieces are a very novel concept as of now. Putting an end to the sameness of baubles fashioned for the arms over the past many decades, these cuffs declare the end of an era in fashion.

Cuffs in the Present Fashion Landscape
Come to think of it, now is the best time for these cuffs to be introduced in the market. Cuffs are like the in-thing as of now, what with ear cuffs spearheading a long lineup of cuff upcoming jewelry.  At their heels, came arm cuffs which came to become an instant hit right from the start. Ladies around the world have loved this new piece of artifact, and are pleased to know that they can put their older jewelry away while they try out these new ones.

A Closer Look
So what’s new and novel about these arm cuffs. For one, they are not clunky or sleek like bangles. For another, they do not have the ruffles and charms of bracelets. Instead, they are slender, ornate and light. They are built to hold on to the upper wrists of the wearers instead of falling and jangling over the wrist. A variety of designs have already landed the shelves. Some of them use gems while others are metal-only. Arm cuffs come in all metals, expensive and cheap. A couple of diamond-studded ones will make a nice addition to your existing collection.