Cushion is one of the most coveted cuts in diamonds at this point. What used to be in the grasp of the likes of round and princess cuts is slowly slipping away to fancier cuts, and as of now, cushion cut is taking the lead in ushering the era of fancy cut diamonds. The peculiarity of the cushion cut is that it is neither round, nor square. Meeting the two shapes somewhere in the middle, the shape is often mistaken for either. How closely it resembles either of the cuts or none depends largely on the setting of the stone. Delicate, but hard to miss, the cushion cut diamond inspires some of the finest rings to be ever sold in the market. Rounded off for you in the article are 5 of the most coveted cushion cut diamond rings. 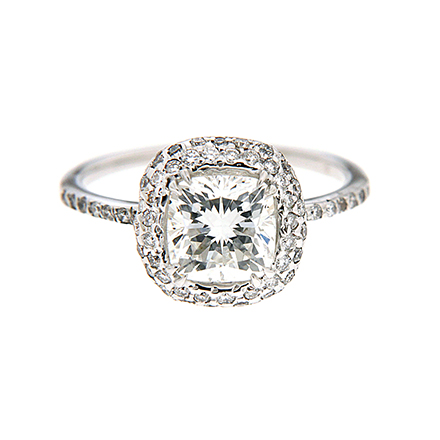 A Six-Prong Cushion Cut Solitaire
Simple, and to the point, this ring is arguably one of the most beautiful items you have laid your eyes on. Holding the oddly shaped sparkle between its claws, a skinny gold flat beaten band is the only other feature of this ring, except the diamond. The center stone is a showstopper. Because of the perfect round of a six-prong setting, it is hard to tell if the stone is another but a round cut. Four of the prongs join the stone on the rounded apexes while the middle two brace the stone from the middle giving it a rounded look.

Accented Band Cushion Cut Ring
Engraving and accenting on shoulders is not a rare quality in rings, and yet this ring stands out from all its kind by this incredible choice of detail and a spectacular cushion cut diamond at its heart. The platinum band has very little surface on top for elaborate details. Microscopic stones are set to highlight the slight shoulders of the ring while serrations have been drawn on slightly elevated sides to create a distinguishable effect. The cushion cut stone at the center is secured by four prongs.

Cushion Cut Ring with Diamond Embedded Band
If you want a ring that makes you not just look like a diva, but also feel like one, then this piece is what you have got to get. Studded with diamonds on all sides, this ring is a sparkly affair. A sizeable cushion cut sits on the center illuminating the band of diamonds that the band of the ring is.